22 people have died and many others wounded following an explosion at the Manchester Arena during a concert.

It’s still unclear what has caused the explosion but many have speculated it’s terrorism related.

Some have been quick to blame Muslims for this terrible incident.

In response, people have been responding with stories of taxi drivers in Manchester (many of whom are Muslim) offering free lifts to those affected by the incident:

FYI: The majority of taxi drivers in/around Manchester are Muslim and they are currently doing a lot to help. They aren't the bad guys.

Before you speculate about those Muslims again, Muslim cabbies and taxi drivers giving free lifts to get ppl safe #Manchester

Others have highlighted the fact that it is likely Muslim doctors will be working through the night saving lives:

'Muslims are to blame'- When in reality Muslim taxi drivers are offering free lifts, and a Muslim doctor working into the night saving lives

Manchester based Imam, Abu Eesa Niamatullah posted the following message on Facebook calling on people to assist in whatever way they can:

We should not allow these incidents to divide us as that is exactly those who seek to do harm want. In times of terrible tragedy, what we do for each other shows who we really are. At times like these we should stick together and assist one another in whatever way we can. 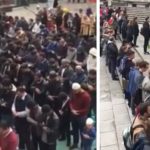 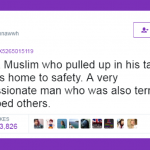