The city of Madinah is beloved to all Muslims. When news broke of a suicide attack, people refused to believe that such a thing could happen. A rumor was spread that it was an accident involving a gas cylinder people were hoping it was no more than that. The Saudi Government soon issued statements confirming that it was a suicide attack.

There are many people who are struggling to accept the fact that such a thing could happen in Madinah, but remember, Umar (may Allah be pleased with him) was attacked in the Masjid of the Prophet (peace and blessing be upon him). He eventually succumbed to those injuries and passed away. Uthman (may Allah be pleased with him) was also murdered by rebels in his home in Madinah. Muslims have witnessed many dark times in their history but they have never allowed such incidents to shake their faiths.

Likewise, we mustn’t let incidents like these shake our faiths. Allah is All-Knowing, Most-Able and All-Wise. He allows things to happen though we may not understand it.

Know that everything is in His control and nothing happens without His will.

Let’s thank Allah that the bomber did not detonate inside the Masjid but rather in a car park which was away from the crowds. Otherwise there would have been much more death and chaos.

We are rightly shocked and we grieve for those who lost their lives.

But remember, the guards attained martyrdom defending the Prophet’s Masjid and his beloved city! Umar (may Allah be pleased with him) would often pray that he attains martyrdom in the Prophet’s city:

Narated By Zaid bin Aslam: From his father: Umar said, O Allah! Grant me martyrdom in Your cause, and let my death be in the city of Your Prophet.” Sahih Al Bukhari

And as for the attacker, he died a humiliating death attacking the defenders of the Prophet’s Masjid!

If the terrorist was seeking to cause panic and distress in Madinah, he has failed. Not longer after the attacks, the Masjid of the Prophet was filled with worshippers praying the last Tarawih of Ramadan, in total peace.

May Allah protect the Haramain from all harms and ills. Ameen 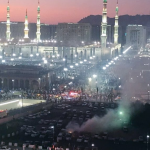 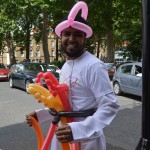