Despite the divisive rhetoric from certain politicians and sections of the right-wing media, Americans have not let hate divide them. Though many support such politicians, the majority of Americans are welcoming people who understand diversity is part of the American way of life. Here are 9 moments Americans defeated hate with love:

1. When an elderly patient reassured her Muslim doctor: 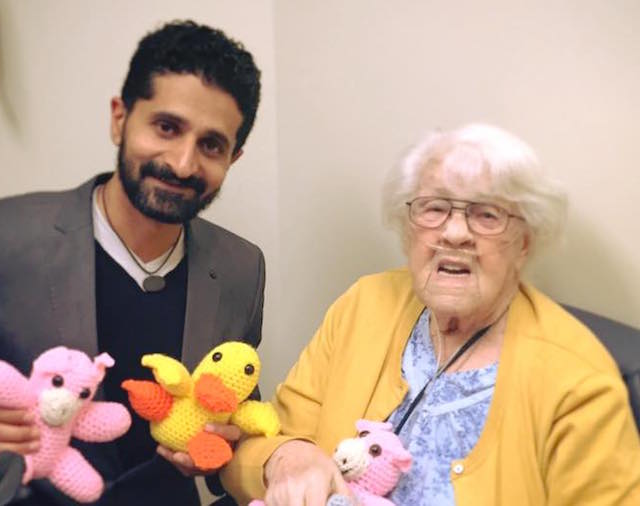 When this 91-year old patient heard about politicians wanting to ban Muslims from coming to the United States she gifted her Muslim doctor with some stuffed animals which she had made and said,

“(We) can feel your pain and what you’re going through.”

“We have to understand that the majority of the people living in this country are like that 91-year-old woman…This 91-year-old single-handedly has proven that no matter of how these forces do, no one will be able to destroy us or divide us.”

2. When an anonymous person taped this message to a Mosque: 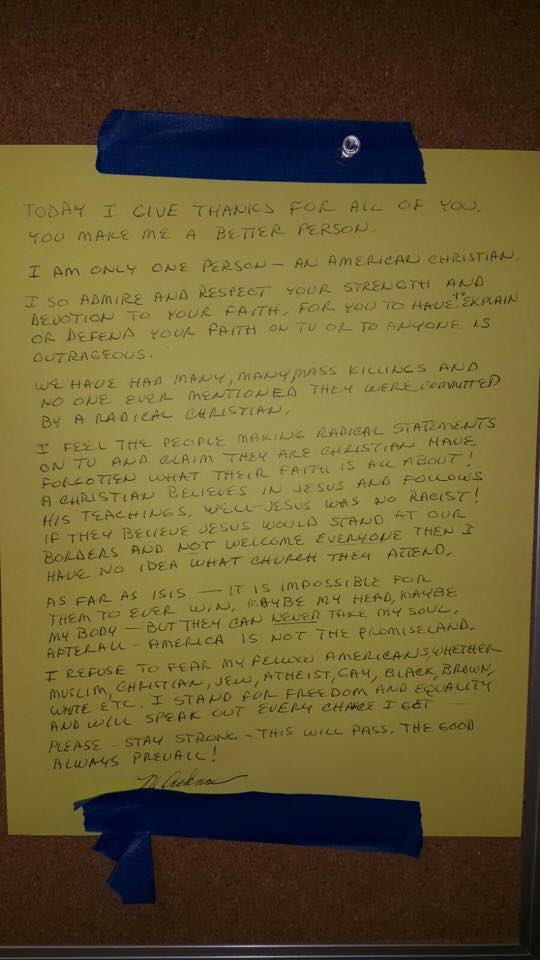 In a letter found taped to a Mosque in Arizona, an anonymous person began by writing:

“Today I give thanks for all of you, you make me a better person.”

3. When these girls wore Hijabs in solidarity with Muslim girls: 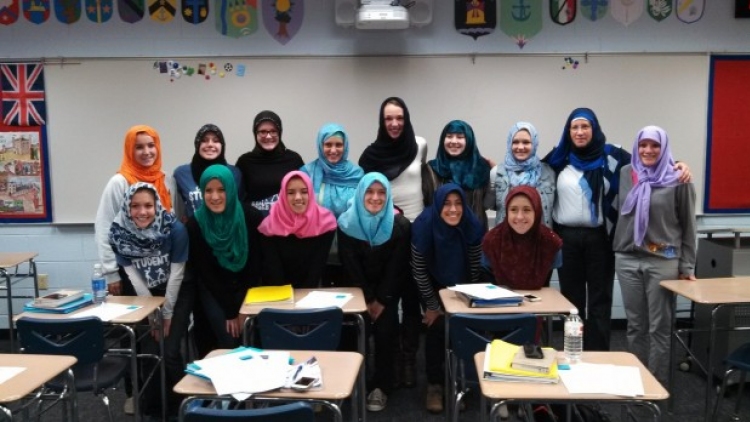 Girls from Vernon Hills Highschool in Chicago wore Hijabs to stand in solidarity with their Muslim peers and help combat Islamophobia in America.

“I think it is a difficult time to be a Muslim student in our high school, in our community and in America. I think this is an opportunity for our kids to embrace the Muslim community within the school. For other kids outside of this organization, to understand what it’s like for these girls to walk through our halls in this garment in a way that stands out from other kids. So, I’m proud of them.”

4. When these Americans held a silent protest at a Donald Trump rally:

They stood silently wearing yellow badges with ‘Stop Islamophobia’ written on them: 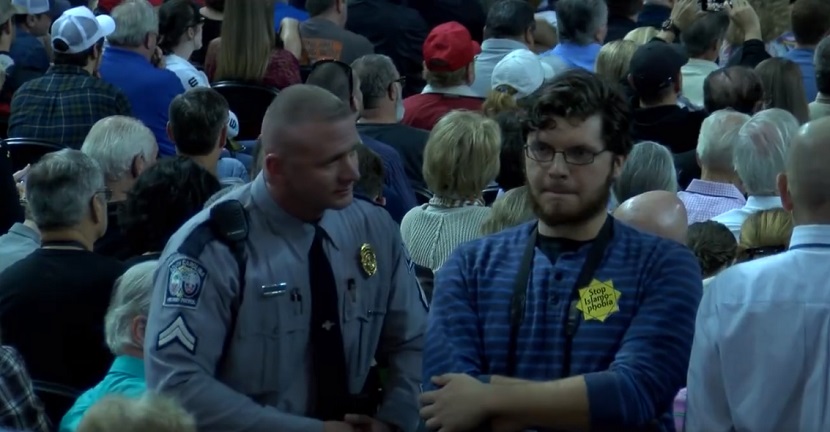 5. When this man stood with a placard saying ‘We Are All Muslim’: 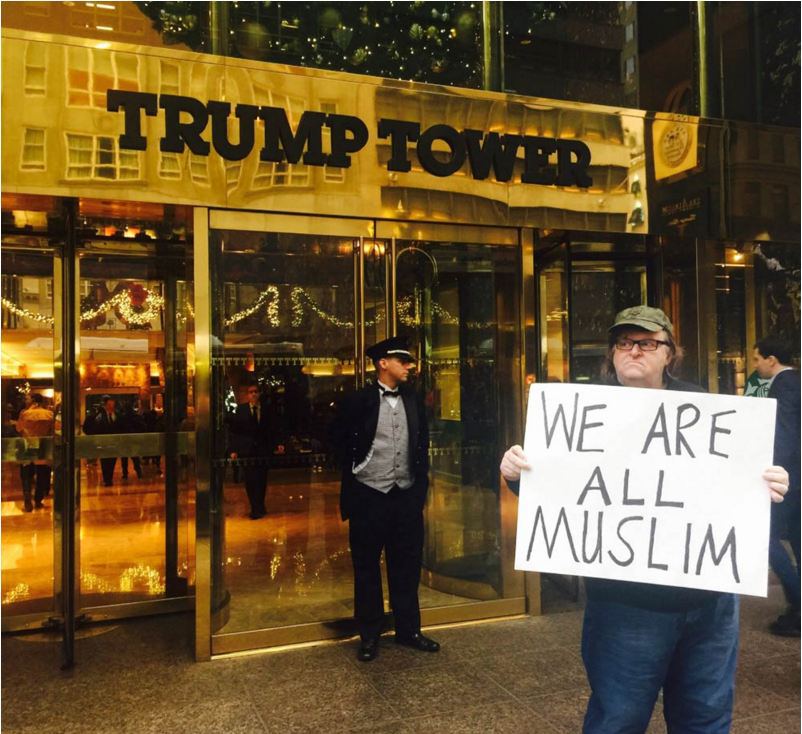 Film-maker Michael Moore stood outside the Trump Tower with a sign saying “We Are All Muslim”. He encouraged others to tweet the hashtag #WeAreAllMuslim to stand with Muslims against hateful rhetoric. He said:

‘I was raised to believe that we are all each other’s brother and sister, regardless of race, creed or colour. That means if you want to ban Muslims, you are first going to have to ban me. And everyone else. We are all Muslim.

6. When this boy donated $20 to a vandalised Mosque:

When 7 year old Jack Swanson heard that the Islamic Center of Pflugerville in Texas had been vandalised, he decided to donate all of his savings – $20 dollars – to the mosque. The Mosque rewarded his kindness by buying him an iPad for which he was saving up for. Read full story.

7. When Jewish Americans Stood Against Islamophobia: 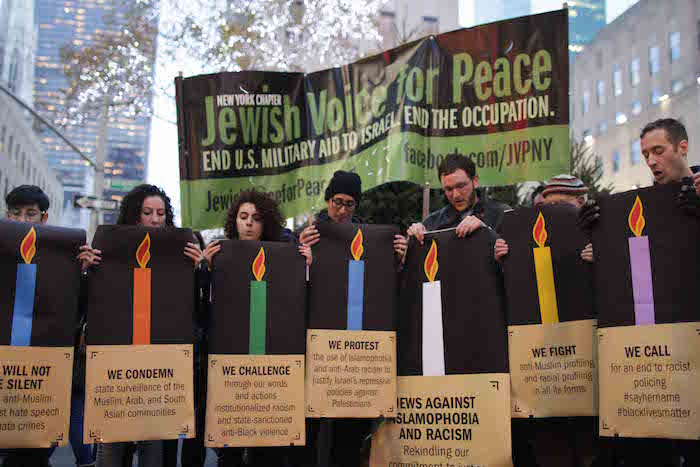 Members of the Jewish Voice for Peace organisation stood in different American cities holding signs declaring their stand against Islamophobia and their support for refugees.

8. When an American of no religion donated $20 to a Mosque: 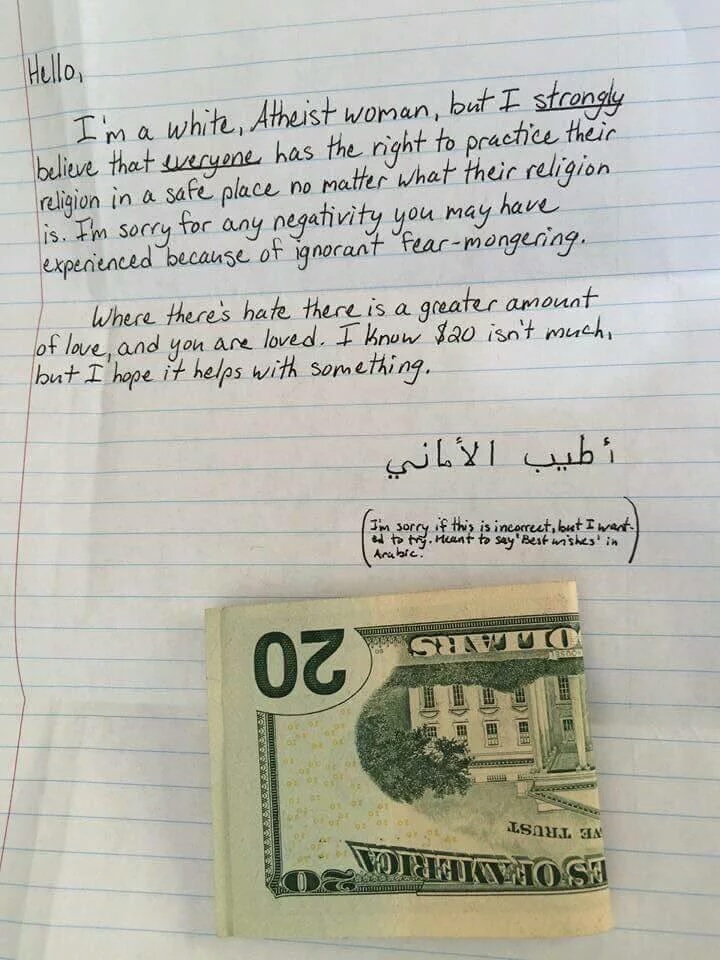 In a letter accompanying the donation, she wrote:

“…I strongly believe that everyone has the right to practice their religion in a safe place no matter what their religion is. I’m sorry for any negativity you may have experienced because of ignorant fear-mongering.”

9. When these church members rallied against Islamophobia: 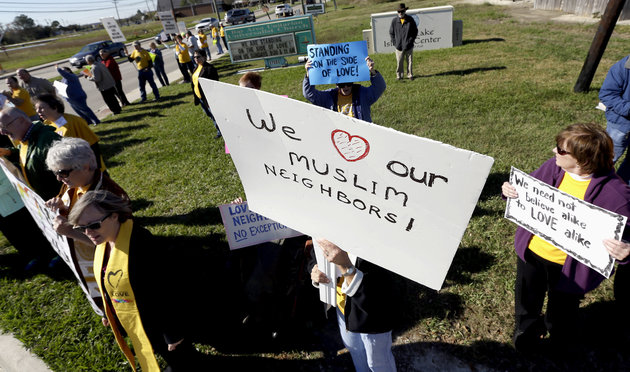 Church’s members rallied in support of its neighboring mosque, the Clear Lake Islamic Center, holding signs saying “love thy neighbor no exceptions” and “we support our Muslim neighbors.”

“It’s important to stand on the side of respect and love and tolerance.”

Share this to show that not all Americans buy into scaremongering news put out by some politicians and parts of the media but rather, they are tolerant, welcoming people. 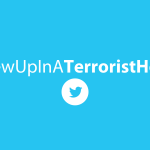 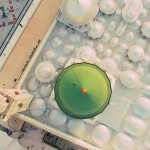