A headline by British tabloid newspaper The Sun which claimed that 1 in 5 British Muslims were sympathetic to ISIS has been proven to be misleading. Muslims have taken to Twitter to respond to the sensationalist headline with the hashtag #1in5Muslims.

Here are some top tweets from the #1in5Muslims hashtag which has been trending on Twitter:

#1in5muslims blow up Their inflatable boat when going to the beach.

Whilst others made reference to awkward situations at work:

#1in5Muslims Have been caught with their foot in the sink.

#1in5Muslims have said “no, not even water” to their non-Muslim colleagues in Ramadan

Many tweeted jokes only Muslims will understand:

#1in5Muslims can keep their wudu all day

#1in5Muslims have accidentally munched on a packet of gelatine haribos

#1in5Muslims think they are scholars after studying with Shaykh Google

Finally, Mujib tweeted what he thought The Sun newspaper was worth:

#1in5Muslims won’t even use @TheSun as toilet paper… It’s not worth it — Mujib Baitul Hikmah (@baitulhikmah) November 23, 2015 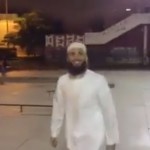 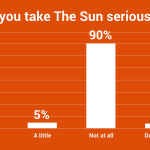