Shaker Aamer was unjustly held in Guantanamo Bay for 14 years and was never charged with any offence. During an interview with the BBC’s Victoria Derbyshire, Shaker Aamer spoke about how creatures such as ants, birds and cats kept him going. He spoke of how he spent time watching them and learning about them.

One peculiar story he shared was about his interaction with some ants which would visit his prison cell. This is the story:

It was beautiful because I learnt so much. They became so friendly with me that I believe, I do believe that animals insects, all kinds of things that…they do realise us, they do know us. They know the differences between us. But we don’t know the difference between them because they are ants but they knew me, as me because I used to feed them three times a day, put food for them at certain times and they didn’t bother me.

So I didn’t know what to do with them because I didn’t want them to wake me up in the night. So I went and I touched my saliva and I put it on the hole. And I promise you, by Allah this is a true story…So I put my saliva and I covered the hole because its wet so when they came and they found the saliva, they got scared and they [would] start running around…and then they cleaned it.

And I saw them coming back again. Then I said, ‘come on guys, I’m feeding you [and] now you are bothering me, I’m waking up all night long for you?’.

So I put the saliva again. Same thing [happened], they ran away etc. Like ‘wow man, these guys they don’t wanna give up’.

The third day when I did it, you know what they did? They sealed it…they sealed the hole. By Allah, they sealed it. They brought little pieces of rusted metals and things and they sealed it..they shoved it in there. And I was like ‘wow man, they know that I don’t want them in there because they bother me’.

And that’s one of the things that kept me going that I had some creatures to watch, to give me time…”

The story reminds me of the story mentioned in the 27th chapter of the Qur’an – the chapter of the Ants. Allah describes how an ant sensed the coming of Prophet Soloman (peace be upon him) and his soldiers:

Until, when they came upon the valley of the ants, an ant said, “O ants, enter your dwellings that you not be crushed by Solomon and his soldiers while they perceive not.” 27:18

Prophet Soloman was given the ability to understand the language of the animals and the creatures of the Earth and he heard the ants plea,

So [Solomon] smiled, amused at her speech, and said, “My Lord, enable me to be grateful for Your favor which You have bestowed upon me and upon my parents and to do righteousness of which You approve. And admit me by Your mercy into [the ranks of] Your righteous servants.” 27:19

May Allah hasten the release of the prisoners who have been unjustly incarcerated. Ameen

Watch the full interview below here. 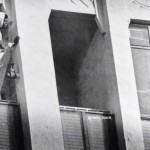