There are certain pillars in the Prophet’s masjid ﷺ in Madinah which have a special significance. Alhamdulillah, the locations of these pillars have been preserved till today. Signs were placed to indicate the names of these pillars known as ‘Ustuwaanah’ in Arabic.

“Those pillars of the Masjid, which are of special virtue and blessed should be visited by the visitor of Madinah. There he should keep himself busy with optional prayers and supplication.” 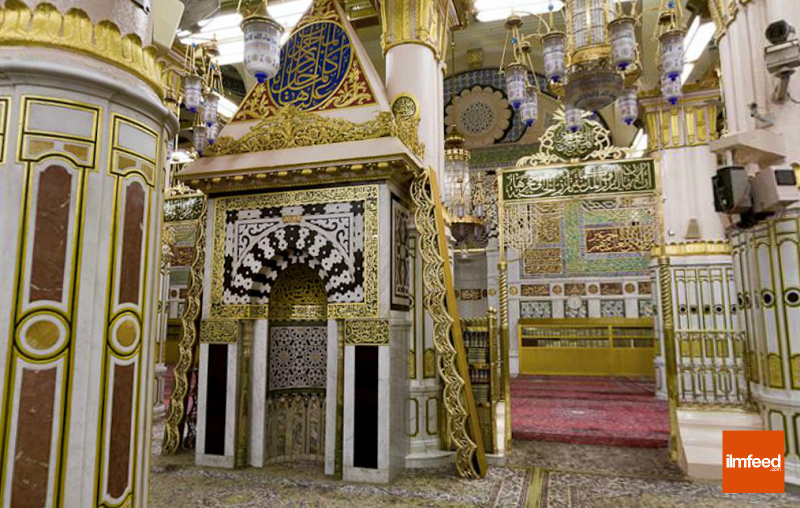 This pillar is located behind the mihrab of the Prophet ﷺ on its right hand side and is the most blessed of the pillars for this was the Prophet’s ﷺ place of prayer. On this spot there once used to grow a date palm. The Prophet ﷺ used to lean on it while delivering the khutbah (sermon). When a minbar was made, the Prophet ﷺ began delivering his sermon from there. When this happened, the sound of crying was heard from the tree and it could be heard around the whole masjid. The Prophet then went to the tree, placed his hand on it and the crying stopped. He then said:

“The tree cries because the remembrance of Allah was near it, and now that the minbar is built it has been deprived of this remembrance in its immediate vicinity. If I did not place my hand on it, it would have cried till the Day of Judgement.”

The pillar which has been placed in its place is called Ustuwanah Hannanah because the word ‘hannaanah’ is used to describe a crying camel.

2. Ustuwaanah A’ishah (May Allah be pleased with her) 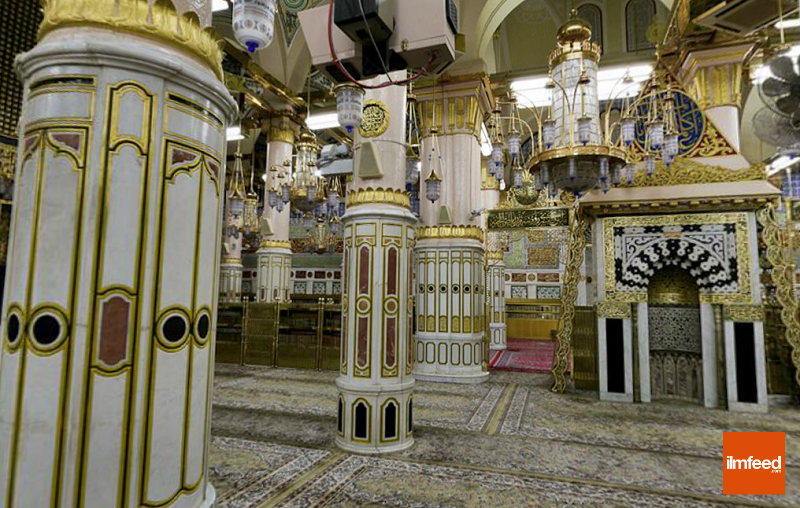 “In this Masjid is one such spot that if people knew the true blessed nature thereof, they would flock towards it in such that to pray there they would cast lots (Qur’ah).” 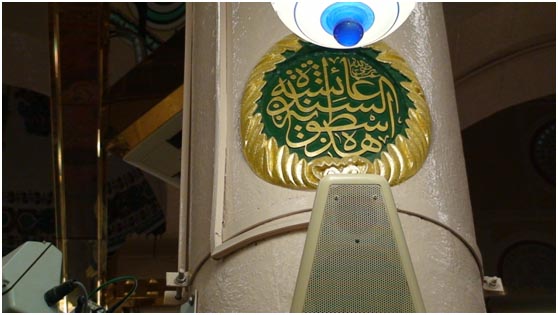 People asked her to point out the exact spot which she refused to do. Later on, after Abdullah Ibn Zubair (may Allah be pleased with him) persisted, she pointed to this spot. It is called Ustuwaanah A’ishah because the Hadeeth is reported by her and the exact spot was shown by her. 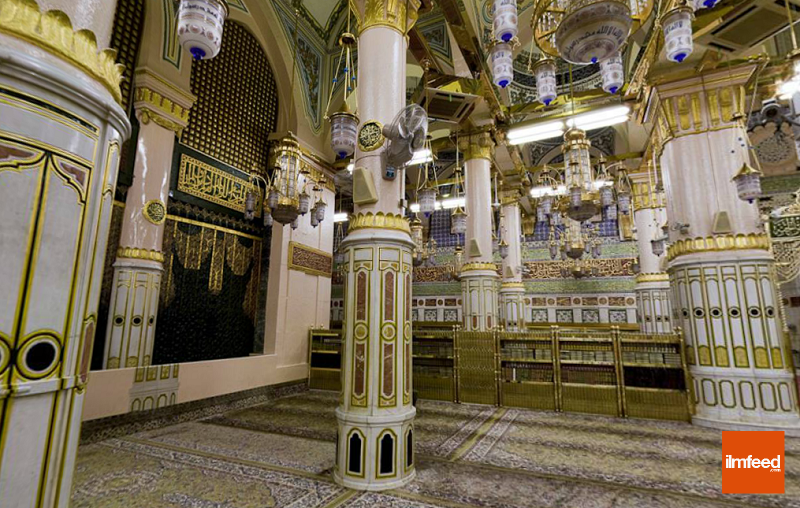 He wasn’t suppose to reveal anything to the enemy and realising his mistake, he became grieved and proceeded to go to the Masjid. He came to a date tree and tied himself to it saying:

“As long as my repentance is not accepted by Allah, I shall not untie myself from here. And the Prophet ﷺ himself must undo my bonds.”

When the Prophet ﷺ heard this, he said:

“If he had come to me I would have begged forgiveness on his behalf. Now he had acted on his own initiative, so how can I untie him until such a time that his repentance has been accepted.” 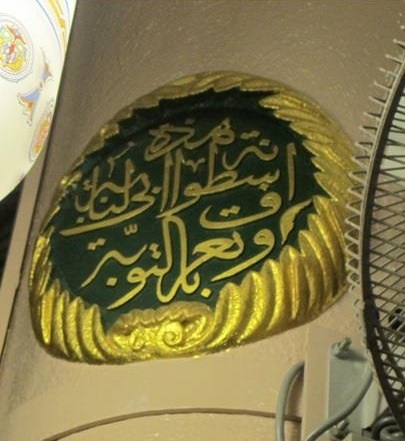 For many days he remained tied there without food and water, except for prayers and when he had to answer the call of nature. Then one morning, after a few days, he received the good news that his repentance (tawbah) had been accepted. The companions conveyed the news to him and wanted to untie him but he refused, saying:

“As long as the Prophet ﷺ does not untie me with his blessed hands, I shall not allow anyone else to do so.”

When the Prophet ﷺ entered for Fajr prayers, he untied him. The pillar is called Ustuwaanah Tawbah (repentance) or Abu Lubabah as it was this very spot in which Abu Lubabah tied himself seeking repentance. 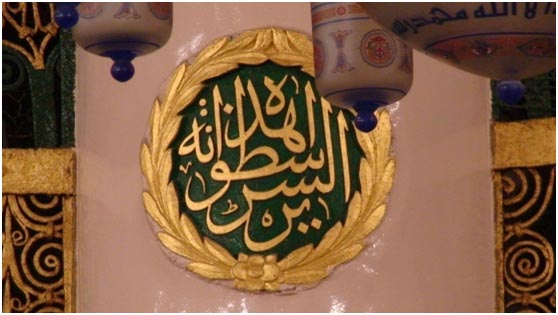 ‘Sareer’ means sleeping place. It is reported that the Prophet ﷺ used to make i‘tikaaf here (seclude himself in the Masjid) and used to sleep here while in i‘tikaaf. A platform of wood used to be put here for him to sleep on.

5. Ustuwaanah Hars / ‘Ali (may Allah be pleased with him).

When the following verse was revealed, the Prophet ﷺ told his companions that he no longer needed people to keep watch as Allah had promised to protect him.

“..And Allah will protect you from the people..” Surah Al Ma’idah, Verse 67

‘Wufood’ means delegations, whenever a delegation arrived to meet the Prophet ﷺ on behalf of their tribes, they would be met at this place where he used to meet them, converse with them and teach them about Islam. 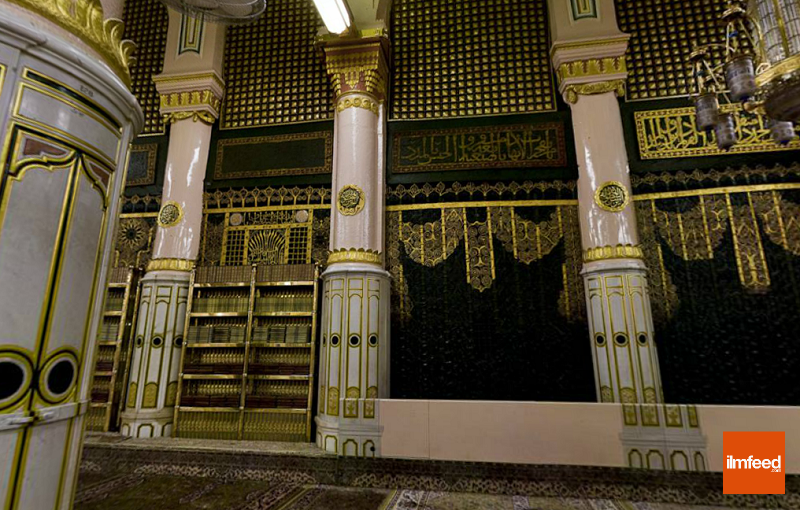 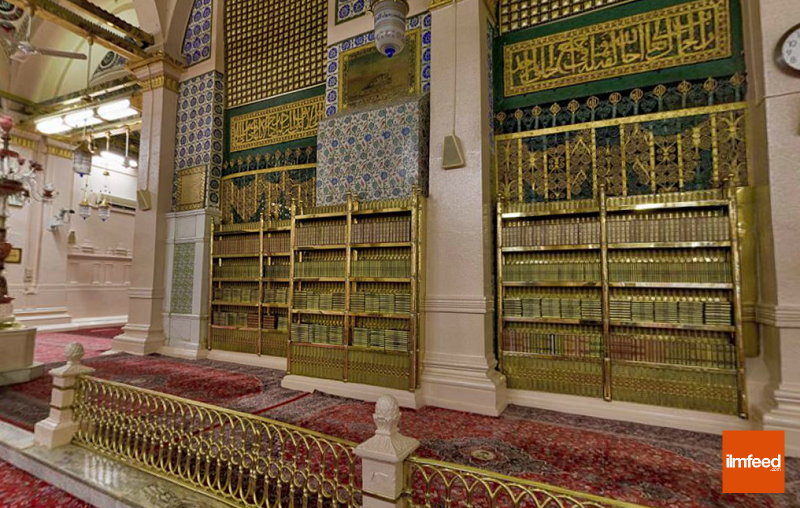 It is reported that this was the spot where late at night a carpet was spread for the Prophet ﷺ to perform tahajjud prayer after the people had left. There used to be a niche at this place to indicate the Prophet’s ﷺ place of performing Tahajjud but it has now been hidden with a bookcase as you can see above.

These historical photos show what is hidden behind the bookcase: 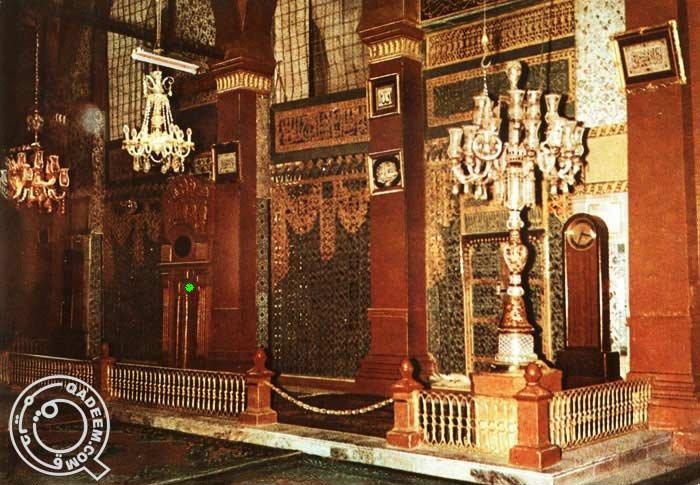 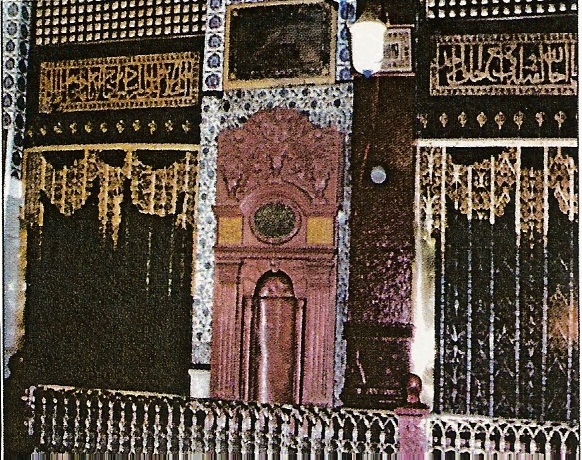 This was the usual place where the angel Jibra’eel used to enter to visit the Prophet ﷺ. Today it cannot be seen as it lies inside the sacred room of the Prophet ﷺ.

These eight places are special but so is the entire Masjid and the city of Madinah. You cannot take a step except imagine that the Prophet ﷺ or his companions must have tread on that exact space many years ago.

There are also pillars which indicate the boundary of the original masjid as it was at the time of the Prophet ﷺ. Written on the top of each pillar is ‘this is the Masjid of the Prophet ﷺ’ 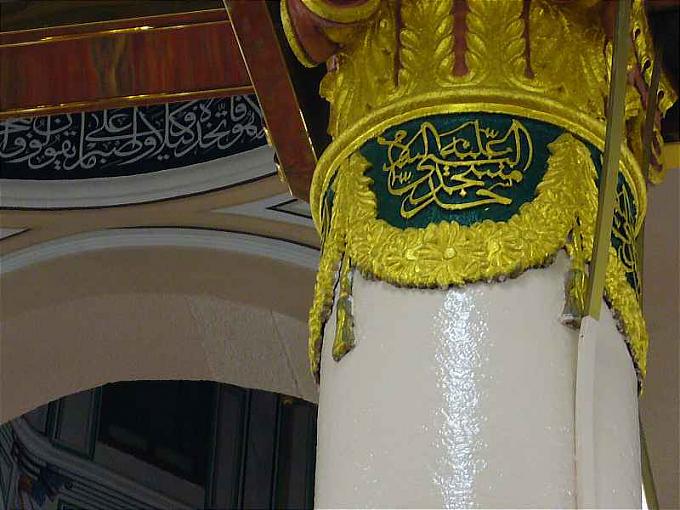 The orange circles indicate some of these pillars found in the masjid: 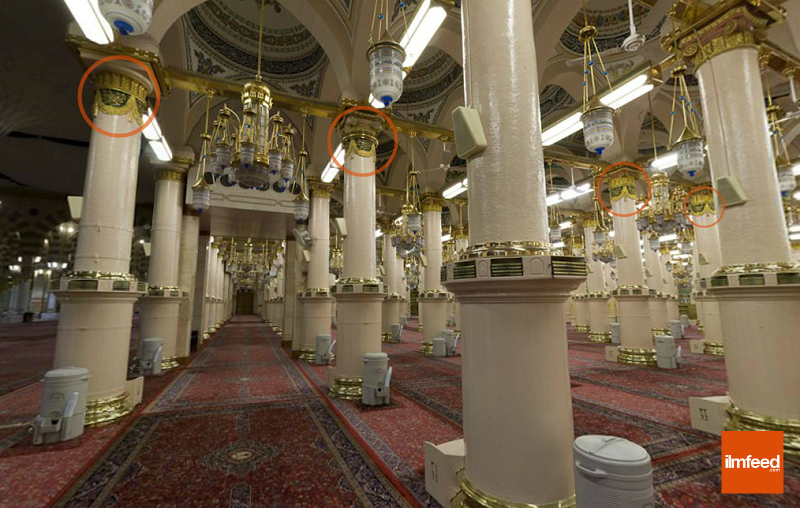 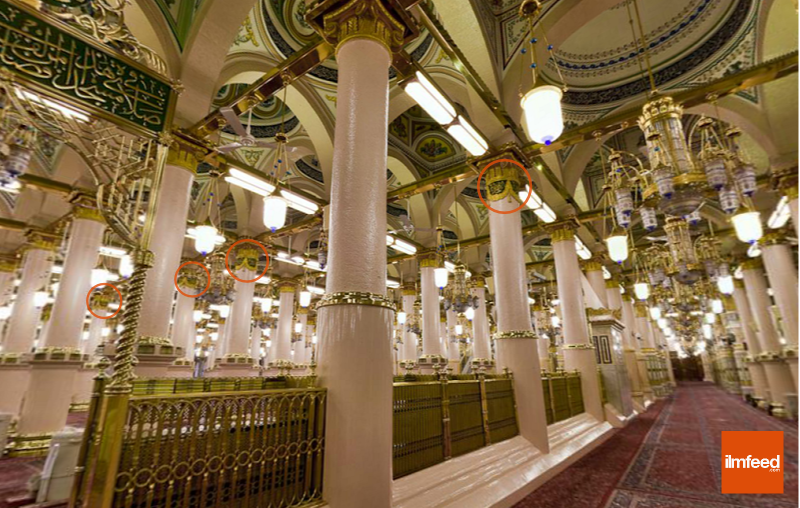 By: Rafiq ibn Jubair
Info: Adapted from How to Perform Ziyarah by Shaykh Saleem Dhorat 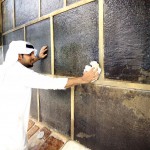 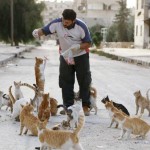