In a suspected anti-Semitic attack, a historical Jewish cemetery in St. Louis, USA was vandalized leaving over 100 headstones damaged.

In response, Muslim activist Linda Sarsour of MPower Change and Tarek El-Messidi of Celebrate Mercy created a crowdfunding campaign in order to raise funds for the Chesed Shel Emeth Cemetery.

The organizers say that they were inspired by an action of the Prophet Muhammad (peace and blessings be upon him):

We are also inspired by the example of our Prophet Muhammad, peace be upon him, who stood up to pay respects for a passing Jewish funeral procession. When questioned on why he stood for a Jewish funeral, he responded, “Is it not a human soul?” [Source: Bukhari].

The organizers hope that this crowdfunder sends out a strong message of unity:

Through this campaign, we hope to send a united message from the Jewish and Muslim communities that there is no place for this type of hate, desecration, and violence in America. We pray that this restores a sense of security and peace to the Jewish-American community who has undoubtedly been shaken by this event.

Learn more about the campaign here. 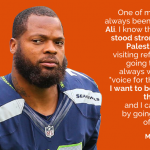 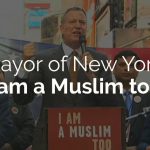