When speaking about the first 10 days of Dhul Hijjah The Prophet said: “There are no days in which righteous deeds are more beloved to Allah than these ten days.” – Bukhari.

Muslims on Hajj will be reciting the talbiyah. If you are not, recite the following in the first ten days of Dhul-Hijjah:

Giving charity in these blessed days is highly rewarding. Try to give to as many different causes as you can even if it is a small amount.

A good way to do this is by signing up to LaunchGood’s 10 Day Dhul Hijjah Challenge. The Challenge allows you to automatically or manually support campaigns by Muslims from around the world, each day for 10 days. Click here to sign up.

3. Fast on the day of Arafah

Start a habit of praying the optional 2 rakah prayer between sunrise and Dhuhr every day during these 10 days.

Abu Hurayrah reported: “My beloved (the Prophet ﷺ) advised me to do three things, which I will never abandon so long as I live: to fast three days of each month, to pray two rakʿahs of Duha prayer, and not to sleep until I pray Witr.” (Bukhari)

5. Prepare Eid gifts for your neighbours

Prepare your Eid gifts for your neighbours and take advantage of the extra rewards during these blessed days.

Abu Dharr, May Allah be pleased with him, reported: The Messenger of Allah, (peace and blessings be upon him), commanded me thus, “O Abu Dharr! Whenever you prepare a broth, put plenty of water in it, and give some of it to your neighbours” (Muslim).

It was narrated from ‘Abd-Allah ibn ‘Amr ibn al-‘Aas (may Allah be pleased with him) that the Prophet (peace and blessings be upon him) said: “The best of du’a is du’a on the day of ‘Arafah, and the best that I and the Prophets before me said is ‘Laa ilaaha ill-Allaah wahdahu la shareeka lah, lahul-mulk wa lahul-hamd wa huwa ‘ala kulli shay’in qadeer (There is no god but Allaah alone, with no partner or associate; His is the dominion, to Him be praise, and He has power over all things).” (Tirmidhi)

7. Perform Hajj (or make your intention for next year)

One of the greatest deeds that can be done during these ten days is to Hajj which begins on 8th Dhul Hijjah. If you can’t make it this year, make the intention during these blessed 10 days to go next year.

Abu Hurayrah (may Allah be pleased with him) reported that the Prophet (peace and blessings be upon him) said: “The performance of Umrah is expiation for the sins committed between it and the previous ones. And the reward for Hajj Mabrur (pilgrimage accepted by Allah) is nothing but Paradise.” (Bukhari)

8. Be extra good to everyone you meet

The Prophet Muhammad said, “Nothing will be heavier on the Day of Resurrection in the Scale of the believer than good manners…” (Tirmidhi)

Perform Qurbani and help feed needy people around the world.

10. Encourage others to do good

Share this article with your family and friends and encourage them to do good deeds during these blessed days.

The Messenger of Allah (peace and blessings be upon him) said, “Whoever guides someone to virtue will be rewarded equivalent to him who practices that good action”. (Muslim)

Related: 10 Reasons Why We Should Take the First 10 Days of Dhul Hijjah Seriously 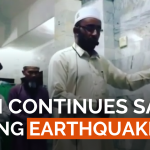 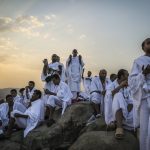