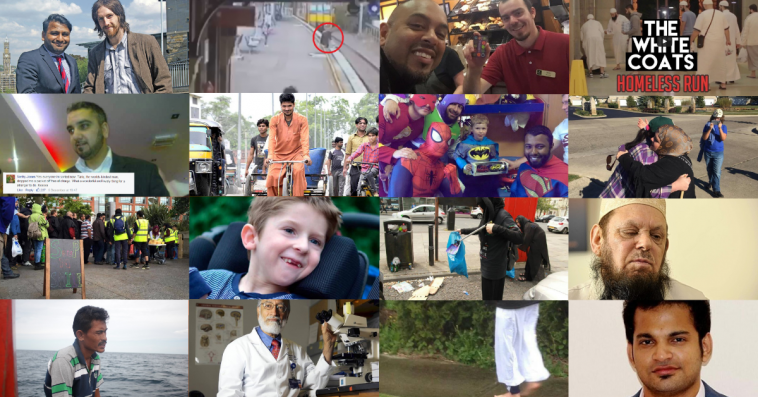 IlmFeed is dedicated to publishing informative and inspirational articles about Islam and Muslims.

At a time where Islamophobia is on the increase fuelled by a negative portrayal of Muslims in some parts of the media, we have made it our mission to challenge that by focussing on featuring positive stories about Muslims.

Launched in March 2014, IlmFeed has quickly become one of the most popular UK-based Islamic websites of its kind and its popularity is continuing to increase worldwide with readers (both Muslims and non-Muslims) from all over the world visiting, reading and sharing articles each day.

Now here is your chance to help IlmFeed grow into one of the biggest Muslim media platforms in the world. We’d like to produce more articles, feature more stories and produce informative videos.

Support IlmFeed now from just £3 a month. The beauty about crowdfunding is that many people can get together with small amounts and make a huge impact.

Here are some stats:

Some Testimonials from our readers:

“I first came across IlmFeed when a friend shared an article of theirs, it was uplifting, informative and shined a positive light on the global Muslim community. I believe IlmFeed is helping to show a side of Islam and Muslims that the mainstream media often ignores. I instantly became hooked to the page and am now a regular subscriber and sharer.” – Toyris Miah

“At a time of darkness for Muslims in the media, Ilmfeed has been a source of light.” – Arman Ali

“It’s initiatives like this that help combat negative and hostile media against Islam, as well as spread the true message and values of Islam. It even a way to increase your deeds in this digital era. I can think of no better brother behind this to lead it and to get it to where it needs to. Allah bless him and the work he is doing.” – Syed Ikhlaas

“I’m a regular reader of the IlmFeed website. I find the articles are really inspirational and the focus on positive stories is a real need in the current climate to help counteract the overwhelming negative portrayal of just about everything related to Islam and Muslims in today’s mainstream media. May Allah (SWT) protect and reward all those involved in this project abundantly in this life and in the Hereafter and increase them in goodness. Aameen.” – Mohammed Naeem

“Ilmfeed is one of the best resources on the internet. A fantastic treasure of relevant, useful and unique content displaying the positive light of Islam. I personally visit the page everyday and love sharing the amazing posts.” – Sadiqur Rahman

“I recently signed up to Ilmfeed after being annoyed by many of the other Muslim content feeds. I didn’t find the content to be well written, engaging and digestible. I found all of that on Ilmfeed. Keep up the great work!” – Ismael Abdela

Prophet Muhammad (peace and blessings be upon him) said, “Whoever guides someone to good will be rewarded equivalent to him who practices that good action”. (Muslim)

Homeless Man Racially Abuses a Muslim Man, He Responds by Finding Him a Job and a Home | Hijabi Hero Rescues Schoolgirl from Oncoming Train | American Muslim Responds to Anti-Muslim Bigots in a Beautiful Way | Muslim Man is Described as ‘The World’s Kindest Man’ by a Complete Stranger. Here’s Why. | Rickshaw Driver Finds 100,000 Rupees, Hands it into the Police | Muslims Feed Manchester’s Homeless | 14 East London Mosques Raise Thousands for Children’s Hospice | Muslims Clean Up Streets of Newcastle | The White Coats – Feeding Sydney’s Homeless | Woman Responds to an Islamophobe with a Random Act of Kindness | The Muslim Scientist Who has Dedicated His Life Looking for a Cure for ALS | The Selfless Hero who Saved Over 300 Rohingya Stranded at Sea | Muslim Man Finds $100,000, Hands it to the Police | Muslim Man Gives His Shoes to Stranger and Walks Home Barefooted | Muslim ‘Superheroes’ Distribute Eid Gifts to Children’s Hospitals | Woman Comes to Protest Against Islam, Leaves with a Hug and a Qur’an | Muslim Immigrant Gifts 10% of His Multi-Billion Dollar Company to His Employees | Heroic Muslim Student Comes to Aid of Pensioner | This is What It’s Like Living in a Muslim Country According to a Non-Muslim | Heroic Muslim Taxi Driver Saves Baby’s Life | Muslims Serve Pizza and Biryani to Middlesbrough’s Needy | Non-Muslims React to #VisitMyMosque Events Across Britain | A Christian Man’s Experience of Visiting a Mosque for the First Time | Mosques Mobilise to Help Those Affected by Floods in Northern England | Mosque to Feed Birmingham’s Homeless During Christmas | Muslims Clean Up East London | Syrian Refugees Collect Aid for Canadians Fleeing Wildfires